French Character Homes is based in Pau, in the Pyrenees Atlantic region of South West France : just one hour from both the ski slopes of the Pyrenees and the sandy beaches of the Atlantic coast.  Winter snow sports and summer beach activities make the region an ideal choice for an all year round holiday home and an equally great lifestyle choice as a main residence.

The video presentation to the left has been produced by the Mairie de Pau and is designed to give the visitor an insight to the diverse lifestyle and activities of this magnificent French city. Apart from its historical and picturesque city centre, Pau also boasts a significant number of high tech industries, from aerospace to oil & gas exploration. Pau airport serves daily flights to Paris, Lyon and Marseille, whilst neigbouring airports serve the UK directly.

France has always been a popular holiday destination ;  perhaps due to its close proximity to the UK, its great climate, its gastronomic delights, its accompanying wines and its endless culture.  Despite these obvious attractions of France as a country, the far south west tip remains comparatively little known to the foreign visitors.  Most people have heard of Biarritz, the town with its exquisitely restored ancient façades, famous for its world class surfing … but Pau as a city remains  little known and yet it is just one hour inland.

The British first discovered Pau following the settlement of Wellington and his troops after their defeat of Marshal Soult at Orthez in 1814.  Seduced by its micro-climate, the English flocked here throughout the 19c bringing along their cultural obsessions like fox hunting, horse racing, cricket, golf, tea rooms and parks.  Pau is home to the first 18 holes golf course in Europe, which was laid in 1856.

Pau is a beautiful historic city ; its château was birthplace to Henri IV, who became King of France in 1589.  The Boulevard des Pyrenees runs from the château to the Parc Beaumont providing a natural balcony with panoramic views of the snow topped mountains.

At French Character Homes, our geographical coverage extends from our offices in Pau to the Madarin wine region to the north ; Tarbes and Lourdes the famous Pilgrimage site, to the east ; the Jurançon wine region and foothills of the Pyrenees to the south and the old Béarn region to the west. 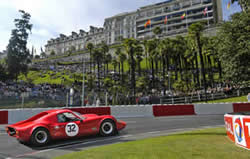 Pau hosts its own annual festival, which is a three weeks extravaganza of dance, music and theatre.  The Tour de France has for many years, completed the mountain stage in its town centre.  Most famously, Pau hosts its own Formula 3,000 Grand Prix and Classic Car Grand Prix, which run through its city’s streets, in its own Monaco style.  The ICF Canoe Slalom World Cup is held in the Wild Water Arena in Pau, also serving as the training centre for the Olympic champion Tony Estanguet.  Pau is also a university town, home to 9,000 or so students, which give a youthful buzz to the historic city.

Heading west from Pau is the region called The Béarn, with the thermal spa town of Salies de Béarn marking the midway point between Pau and Biarritz.  There are four main towns in this area; all of which have the benefit of being close to the coast, the mountains and Pau.  Salies de Béarn is known as “the Venice of the Béarn” due to the way its timber framed 17th century houses overhang the River Saleys. Famous for its therapeutic salt waters, this enchanting little town also boasts a casino and a nine hole Golf Course.  Ten minutes south is the beautiful medieval town of Sauveterre de Béarn with its lively summer festivals and breathtaking views across the countryside and the Pyrenées mountain range. Navarrenx, a charming 14th century fortified town is famous as a resting point for the Pilgrims on route to the Cathedral of Santiago de Compostella in northwestern Spain.  The market town of Orthez, birthplace of Jeanne d’Albret, Queen of Navarre and mother of King Henry IV, with its “Tour Moncade” – remnants of the 13th century Castle Moncade dominating the town centre. 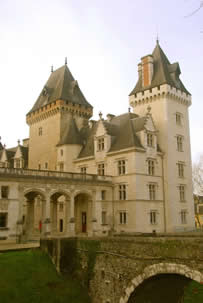 Heading further west towards the coast is the Basque country, with Bayonne being its capital city.   Over-looking the River Nive and the River Adour and best known for its 13th century cathedral dominating its centre and for its fabulous gastronomy including Bayonne Ham and Bayonne Chocolate …. not to mention of course, its premier league rugby team.  Biarritz, well known as being the town with its exquisitely restored ancient façades, good restaurants and designer boutiques. St. Jean de Luz, the once quiet fishing port is now a bustling habour littered with artists busy painting and visitors enjoying local delicacies in the many seafood restaurants.

For the energetic, the Pyrenees mountain range offers a host of exciting activities from canoeing, rafting and kayaking to hand-gliding, rock climbing and horse-riding. For winter sports, the Pyrenean summits boast hundreds of kilometers of ski runs, which meander beneath branches of pine trees. There are several summits topping 3000 metres, including Pic du Montcalm (3077m), Pic du Balaitous (3146m), and the famous Pic du Midi (2872m). Along the Atlantic coast, water-sports are of abundance. Biarritz has a strong surfing culture, which is of world class standard.

For a calmer pace of life, one can explore the music and cultural events held in the Parc Beaumont Casino, visit the art galleries and museums or explore Pau Château, birthplace of Henri IV who became king of France.  In the historic quarters of the city, in front of the Château are many restaurants offering alfresco dining and a short stroll from the rear of the château leads one to Pau Golf Course ; the first golf course in Europe.

Whether you choose to eat on the terraces of small restaurants or dine in the elegance of grand restaurants, France prides itself in its gastronomic delights. Among the specialties are foie gras, Toulouse style "cassoulet", confit de canard, magret, and naturally a vast range of charcuteries and local cheeses. To accompany the renowned French cuisine, the choices of wines are plentiful. The best known in the area are the Jurançon whites to the south of Pau ; the Madarin reds to the north and the Bellocq rosé to the west of the region. Armagnac is also a favourite beverage and is one of the oldest French ‘eau de vies’!

The South West of France boasts an average of 2000 hours of sunshine per year, making it one of the sunniest regions of France. Temperatures exceed 25C between 60 and 80 days of the year. Spring comes early and has a feel of summer. Winters can be cold, but this provides enough snow for skiers extending the season from December to April.